Angel in a Storm

Angel in a Storm

This story happened during one of those South Dakota blizzards. For three days great swirling gusts of snow had been sweeping across the countryside. The cold wind howled with increasing intensity. In most places the fence posts were buried in snowdrifts. 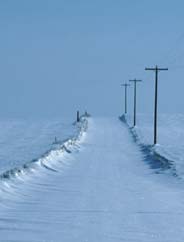 Daddy Nelson was ill, the well was frozen, and there was no more drinking water. Melted snow could be used for most purposes, but the Nelsons didn’t feel that it was safe for drinking water. Not too much was known in those days about germs, and there were several epidemics going around.  The worried family gathered for consultation to determine what could be done. Kaye and her brother Joe were elected to go after water from another well across the road.

Kaye donned Daddy’s heavy jacket, which reached below her knees. The rest of the family brought old trousers, scarves, and everything warm they could find to wrap her in. Brother Joe was subjected to the same treatment, and they started out with their buckets in the storm.

The cold wind was awful. Before they had gone very far Kaye called to Joe, “Oh, I forgot to leaves my glasses at home, and they are frozen over so I can’t see! But I guess I can put them in my pocket.”

“Be careful, Kaye,” yelled Joe above the storm; “be sure you don’t put them in a pocket that has holes in it!”

On they went, falling often as they stepped into holes and ruts they couldn’t see because of the snow.

“Kaye, I’m worried about your glasses; check and see if you still have them.”

Kaye felt in her pocket.

The children paused and looked back. The snow was coming down so fast that even their footprints were covered over right behind them and could not be seen.

Now the Nelsons were in no position to buy another pair of glasses, and Kaye was desperate.

What could she do? She just had to have those glasses!

There was only one hope to brighten the situation. God knew where those much-needed glasses were. He would help her find them.

As they stumbled through the blinding storm on their way to the well, Kaye prayed more earnestly than she had prayed in a long time.

After many struggles they got their buckets of water and were on their way back to the farmhouse. There was no use to try to go back the way they had come because there was nothing to guide them. Everything was covered with freshly fallen snow, even where they had fallen into holes.

Somewhere along the way Joe stared in amazement and Kaye shouted for joy! There were her glasses! They were lying right on top of the snow, not covered at all! She picked them up almost reverently.

In her heart she felt certain that an angel had found them and laid them there for her. With the snow falling so fast, how else could it have happened!

Kaye and Joe were very thankful they had the glasses, but the experience meant far more than any material blessing.

It is a wonderful thing to worship a God who cares, a God who will send an angel from heaven to find a pair of glasses for a little girl in a snowstorm.

And it is a real thrill to wear glasses that have been carried in the hands of an angel!

Read what the Bible has to say about Angels