George was born in Klawock, Alaska in 1938. He was given the name ‘What Staw’, which means ‘The Raven that takes the long way around’. George then grew up in the little fishing village of Craig about 7 miles from there. His people lived off the land canning and drying mostly everything they would need to eat during the winter.

In the ‘Thling-git’ tribe he was taught at an early age to respect those older than him. From 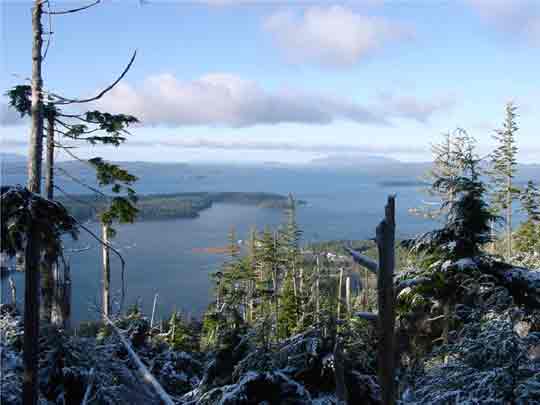 a young age he learned not to interrupt adults when they were speaking. He learned if he wanted to stay up a little later at night and listen to stories of long ago he had to be quiet. Otherwise it was ‘to bed with you’.

He also learned a great respect for nature. He was taught to respect animals and fish. He learned not to make fun of them. To do this would have been like making fun of the ‘Creator of all’.

Before the first missionaries came to Alaska George’s people knew there was a Trinity. They knew God the Father as ‘Dee Kee on coow woo’, (The Great Man Up Above). His Son was ‘Doo Yest Saah Teeh’. The Holy Spirit was known as ‘Hailth Owalth Kaa Yaay Goo’.

In his community the church bells rang every Sunday morning at the Presbyterian Church. The bell tower was one place George especially loved to go each week.

“HI GEORGE!” shouted the bell ringer one Sunday morning over the clanging of the bells. “WOULD YOU LIKE TO HELP ME RING THE BELL?”

George then grabbed hold of the rope the man had pulled down. As he let go both George and the rope went up in the air. George loved the ride!

After church George and his large family went home and ate the big Sunday Dinner his mother had prepared. As they ate the dinner George listened to his mother speak.

"I don’t believe the deacon collecting the offering should drink and I don’t think he should smoke either. And when I read the Bible it seems to me that it tells us we should go to church on Saturday,” George heard his mother tell the others.

George didn’t think much about what his mother said that day, until the following Saturday.

He was washing the morning dishes and watching planes fly outside the kitchen window when he noticed his Aunt Bessie and his Uncle Sam walking up to their house. He wondered what would make them come this early on a Saturday morning. In ‘Thling-git culture it was not customary to visit others in the morning unless something shocking had happened, either good or bad.

“Mom, Aunt Bessie and Uncle Sam are coming up our walk,” he told his mother.

“I wonder what news they have,” his mom stated. “I hope it is something good.”

George got the door and let his aunt and uncle in.

“Come in and sit down,” he invited.

George then got his aunt a cool drink of water to drink.

He then listened as his Aunt talked to his mother and the rest of his family.

“Maggie,” his aunt addressed George’s Mom, “I had a dream last night and I couldn’t wait to tell you about it. That’s why I’m here so early. It seemed so real I can still hear the person’s voice talking to me.”

She then told her dream:

George’s Mom sat there for a moment thinking about what Bessie had just told her. Finally she said, “We will wait and see if your dream comes true.”

In George’s culture dreams were respected. He too would wait and see if what Aunt Bessie said would come to pass. He wondered what the dream meant. What kind of changes would they have in their diet?

One day passed and no one had come to visit their village. One week had passed and no one had come. One month went by and still no one had come to their fishing village. And then about six months after Aunt Bessie’s dream Pastor Stewart Emery and his family showed up in the little village of Craig, where there were six families waiting for him to evangelize. For these six families Sunday would no longer be their day of rest. All the mothers of these families decided to get baptized. Even the fathers of all except one of these families decided to join the Seventh-day Adventist church also. Many of the children were baptized as well.

Eventually, it became time for George to be baptized. As George stepped into the cool Alaskan salt water he realized how much closer his family had been to God since they started worshiping on Sabbath. He wondered where they would all be spiritually if they hadn’t received Aunt Bessie’s Dream.