This is based on Daniel 1 from the Bible 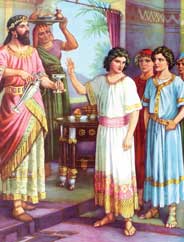 “Where am I?” asked Daniel, rubbing his eyes. “Prison!” muttered Hananiah, who lay beside him in the dungeon.

Babylon! Suddenly it all came back. What a nightmare! Daniel remembered how the prisoners had been seized and bound, the dreadful march across the desert to Babylon, the blows and curses of the conquerors, and finally prison.

Now, as the morning sun shone through the grating above their heads, Daniel, Hananiah, Mishael, and Azariah began to realize what a sad, sad thing had happened to them. All four belonged to good families in Judah. They had always enjoyed the best of everything. Now they had nothing, not even freedom.

As they looked ahead, the future seemed dark. They would never again see their beloved country, their homes, their fathers and mothers, their brothers and sisters. For the rest of their lives they would be slaves of a hated enemy.

As they talked together they must have asked each other, Why did it all happen? Then they remembered Jeremiah’s warnings that these very things would take place if the people did not give up their idols and turn again to God. Perhaps right there in prison the four young men asked God’s forgiveness for their sins and made up their minds to be true to Him always, no matter what the Babylonians might do to them.

One day the prison door opened, and an officer named Ashpenaz came in. He looked over the prisoners and picked out Daniel, Hananiah, Mishael, and Azariah. At first they wondered why. Had they done something wrong?

Ashpenaz explained that Nebuchadnezzar was a great and farseeing king. He did not kill all his captives. Instead he chose the best of them, those who appeared strong, healthy, and intelligent, and he educated them in the school of Babylon. In this way, they would become a strength to the country in days to come. The four boys, he said, should consider themselves very fortunate that they were among the few chosen for this honor.

They did. They were very happy about it. But they were worried about what else this honor might mean. Would they be expected to worship the god of Babylon?

They were even more worried when Ashpenaz told them that their names would be changed. Now they would have Babylonian, not Hebrew, names. Daniel was given the name of Belteshazzar; Hananiah was called Shadrach; Mishael, Meshach; and Azariah, Abednego. Apparently their masters meant to change them completely. They were to forget they were Hebrews and become Babylonians.

Then came the first big test.

King Nebuchadnezzar gave orders that the captives who had been chosen to be taught “the language and literature of the Babylonians” should be fed from the king’s table. They were to eat what he ate.

No doubt the king thought he was doing the captives a very great favor in providing them “a daily amount of food and wine from the king’s table” – and he was. But Daniel and his friends were troubled. They felt they couldn’t eat the food that was prepared for the king. It was probably first offered to idols. As much of it was forbidden by God as “unclean.” As for the wine, it was the fermented kind that was full of alcohol. So they couldn’t take that either.

What should they do? Was it worth fussing about? After all, it was only food and drink. Maybe they could take just a little and avoid offending the king. Surely when a heathen king had gone so far in trying to be kind and generous to his captives, it would be downright rude not take the food and drink he gave them.

“But Daniel resolved not to defile himself with the royal food and wine.” He felt that if he were to yield on this point, he would give away everything. He could never take a stand on anything else. If he was going to be loyal to God all the way, he had better start here and now.

So Daniel plucked up his courage and spoke to Ashpenaz. He respectfully explained why he and his three friends could not take the food so kindly offered them. Would if be all right if they had something else? Nothing special of course – just vegetables and cereals, and good plain water to drink.

Ashpenaz listened patiently. He liked this young man. Indeed, “God had caused the official to show favor and sympathy to Daniel.” But now he was worried. He didn’t see how it could be done.

“I am afraid of my lord the king,” he said. “If you don’t eat the food he has provided, and you come thinner than the rest of the boys, he’ll take my head off.”

Daniel knew how easily this could happen. Yet he felt sure all would be well. So he went to Melzar, the guard Ashpenaz had put in charge of the four boys, and told him what they wanted to do. “Just let us try it for ten days,” he said pleaded. “Give us vegetables to eat and water to drink. Then look us over and do what seems best.”

With many feelings of doubt, Melzar agreed. Instead of king’s food and wine, he gave them vegetables, cereals, and water. And you can imagine how he watched them day by day for the first signs of weakness!

But they didn’t fall sick, and their faces didn’t grow think and pale as Melzar had expected. “At the end of the ten days they looked healthier and better nourished than any of the young men who ate the royal food.”

Melzar was surprised and very pleased. From now on he gladly gave the four boys the food they wanted. And somehow they were able to think more clearly than the others. They remembered their lessons better. Living on a clean, simple diet, they were able to gather knowledge and wisdom faster than all the rest put together.

At the end of three years they graduated from school with highest honors. As a special reward, they were presented to King Nebuchadnezzar.

They had never expected this! Certainly not on that far-off night when they arrived, all weary and discouraged, at the prison. As for Nebuchadnezzar, he was impressed. Of all the young men he had in training, “he found none equal to Daniel, Hananiah, Mishael and Azariah; so they entered the king’s service. In every matter of wisdom and understanding about which the king questioned them, he found them ten times better than all the magicians enchanters in his whole kingdom.”

Would you like to be “ten times better” than all the boys and girls in your school? Ten times wiser, 10 times healthier, 10 times nobler? You can be. Just determine in your heart to serve God always, whatever the cost.