Grandpa and the Cougar

Grandpa and the Cougar

"I wish I could have a big dog like Max’s St. Bernard. Of course, Blondie’s all right, but she’s really too little to be a real watchdog. She’d never be able to scare away burglars or pull me out of a river if I started to drown or – well, do anything brave like that. Would you, Blondie?" Stevie asked his tiny fox terrier, who sat looking up at him, her big brown eyes aglow with love and devotion.

"That shows how little you understand dogs, Stevie," laughed Mrs. Smith. Wait until I stir the potato soup that is cooking for supper, and I’ll tell you a story that will make you appreciate the real courage of a small dog."

After a few moments Mrs. Smith returned to the living room, where Stevie and Blondie sat waiting for her.

"This happened many, many years ago, when my grandfather was a young man. He had been working about sixty miles from home, up in the McKenzie River region, which was then thickly wooded, with only a rough wagon road leading across the mountains.

"He had finished his work in that particular section of the country and had spent several days walking down along the roadway that wound beside the beautiful, rushing McKenzie River.

"His only companion and friend was Trixie, a tiny black-and-white fox terrier who had been with him ever since grandfather had bought her as a tiny pup a few years before. 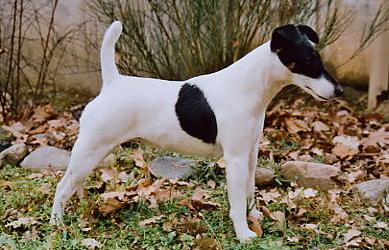 “‘Here is a lovely spot in which to eat our lunch and enjoy some of this dried venison, old girl,’ he said, pausing by a grove at the river’s edge. ‘There’s a nice, quiet pool here, too, where we can drink. Come on.’

"He started down toward the pool and then looked back. Trixie stood frozen and tense at the spot where he had left her. Her ears pointed straight up and the hair along her back also stood straight up.

"‘What in the world!’ shouted Grandpa Brown. ‘Trixie! Come along now.’

"A deep growl rumbled in Trixie’s throat. She didn’t even look at her master. Her keen eyes stared straight ahead down the road where, a short distance away, an enormous boulder rose skyward some twenty feet or more. It lay between the road and the river, and they would pass beneath it when they continued their journey.

" ‘Stop that!’ spoke grandpa sharply. Then he did something that he had never done before that time and which he always regretted afterward. He was hot and tired, and the dog’s seeming disobedience angered him. Leaning over, he gave her a hard slap.

"Cringing, she followed him to their midday resting place, but though he offered her both food and water she refused them and lay motionless, nose sniffing the air, eyes fastened upon the rock.

"What’s wrong with that dog? She must have smelled out a rabbit or a chipmunk,’ muttered grandpa to himself, as he finally rose to continue his trek. ‘Hope she doesn’t act like this the rest of the day, or I’ll have to carry her in order to reach Trail’s End Ranch by nightfall. And since I loaned my gun yesterday to friend Jones, I’d rather not be caught out in the mountains after dark. Too many wild animals, though they never bother humans in the daytime.’

“‘Come along,’ he spoke disgustedly to his pet, who followed nervously, breaking into gruff little growls every step or two.

"Grandpa strode impatiently ahead and did not look back until Trixie yelped shrilly and then ran excitedly around and around him, pulling frantically at his leggings.

“‘Stop it, you crazy dog,’ he ordered, looking all about them. He saw nothing to cause the slightest alarm. The only moving object was his terrier, trying to block her master’s way.

"Stop it," Grandpa repeated, and, pushing Trixie aside, he hurried on. A few strides and he was opposite the tall rock, whose upper half jutted out over their path. Again Trixie pulled at his clothing.

"Suddenly a terrific blow ripped slantwise across his back, so that he staggered and almost fell face downward. A sharp stinging sensation spread across his shoulders, and blood began to drip down his loosely rolled sleeves.

"A whirling cloud of dust from which arose fierce deep growls, frantic barks, and at last a wild howl roused him from his half-fainting condition, and he managed to turn just in time to see a half-grown mountain lion, or cougar, bounding into the woods, with Trixie dangling from his clenched jaws.

"Grandpa Brown half walked and half fell down to the river, where he lay for some time before he could lift himself up to wash his deep wounds. From his resting place he could look up and see very plainly the wide, almost hidden ledge upon which the mountain beast had crouched, probably waiting for a young deer to pass by.

"While it was unusual for one of his kind to attack a man in the daytime, our family always thought that it might have occurred because he was angered by Trixie’s barking and because he was tempted by the smell of the dried deer meat slung across Grandpa’s back.

"At any rate grandpa was a much sadder and wiser man as he crippled along, mourning the loss of his faithful watchdog and companion. Telling the story to friends at Trail’s End Ranch that night, his eyes filled with tears as he relived Trixie’s vain efforts to warn him, and his cruel impatience with her.

" ‘There went the best friend a man ever had,’ he said sorrowfully. ‘Look for her? No, I didn’t look for her. I was wounded and had no gun, and, anyway, how long do you think she’d have lasted with that big mountain lion? She’d make about one bite for him. No, I just figured that was the end of Trix. Poor little pet!’ And grandfather, big strong man that he was, was not ashamed to take out his handkerchief and wipe his eyes."

In all this time Stevie had not once stirred. Now he let out his breath in a deep sign, and tears filled his eyes as he cried, "Oh, Mom, how awful! That brave little dog. Grandpa should have gone back to search for her. That wasn’t one bit fair, after Trixie saved his life."

He caught up Blondie and held her tight in his arms, as though he half expected her to be snatched away by a pouncing beast.

Mom smiled. "But that isn’t the end of my story. A few days later, after grandfather had somewhat recovered from his experience, he was walking in the woods near the ranch. Suddenly he heard faint, faraway yelps. He stopped and listened. They grew louder and louder and closer and closer until finally, crashing through the underbrush came bounding—–"

"No," laughed mom. "It was Trixie. Faithful little Trixie had found her way back to her beloved master. Grandpa could hardly believe his eyes as he saw her jumping up toward him, overjoyed at being with him once more. How she had escaped from her captor no one ever knew and, of course, Trixie could not tell. Her body was covered with scratches and bites, but she soon healed up and was none the worse for her ordeal.

"You may be sure that grandpa and Trixie were the talk of the valley for a while, and Trixie was so petted and praised like a conquering hero.

"The little terrier lived to a ripe old age. Grandpa treated her like royalty, catering to her every whim.

"Uh-oh!" Stevie answered, hugging Blondie so tight that she squealed, "I guess a fox terrier is just about the best watchdog anyone could have. Size doesn’t mean very much, after all. Even if you’re little you can be brave."

"I’m glad that you have learned a lesson from my story," smiled his mother. "Size doesn’t count. And that is true of people as well as animals. It is the brave heart that helps one to win, whether the body surrounding that heart is large or small.