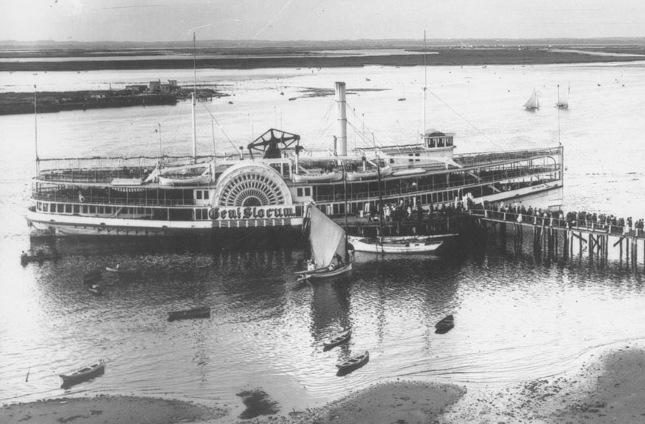 A great steamship, the “General Slocum,” was docked at its East River pier in New York, its sides gleaming white in the morning sunshine and the smoke slowly curling from its huge smokestacks. Deck hands were busy scouring the decks, polishing the brass railings, and sprucing up the ship for an excursion scheduled for that day.

It was to be an outing for Christian young people and children, and all who wished to join the group were urged to be at the pier before ten o’clock that morning, when the steamer was to leave the dock.

“Heather!” Becky asked, “Did you hear about that wonderful trip down Long Island Sound on the ‘General Slocum’? I’ve been begging Mom to let me go ever since I heard about it, and she has finally said that I may if your parents allow you to go, too. Won’t you come?”

“Only fifty cents for children, and it is to be an all-day! There will be music and games, and we will have our lunch with us, of course. Then there will be just hundreds and hundreds of people on the boat. I love a big crowd if I have a friend along. Please hurry, Heather, and find out if you can get permission to go.”

“OK, Becky. I’ll go and see what my parents think, and I’ll let you know. Today’s my birthday, so I guess they’ll let me go. We should hurry; the boat leaves in two hours.”

Heather vanished, while Becky skipped back to have her mother begin fixing the picnic lunch. She was sure her friend would soon be back with the happy news that they could go together.

Heather had just enough time to tell her parents about the excursion in glowing terms, before she received a firm refusal.

“I couldn’t let you go away like that, my love,” said her father. “It’s never safe for a child to go out alone in a large crowd. Something could easily happen to you while you are off for a day like that. Think of it, most of the company would be entire strangers to you, with no interest in what you do or what becomes of you. I’m sorry to say no, but no it must be this time.”

“But Dad, “ protested Heather, “with a big crowd, that’s all the more reason why it is safe. What could happen anyway, with all those people around? It is the finest excursion ship there is, and it surely has plenty of life preservers. Besides, there will be no fog on this sunshiny day. There just couldn’t be an accident. And remember, this is my birthday!”

“I’m sorry to disappoint you,” said Dad, “and especially on your birthday, but I don’t think it is best. One never can foresee the difficulties that may arise on a large, crowded steamer like that.”

“Oh, Mom, can’t I go? You will let me, won’t you?” begged Heather. “Dad just doesn’t understand. I am old enough to take care of myself—twelve years old, and going on thirteen. When am I ever going to learn to go places and to do things by myself, if I am always tied to someone’s apron strings?”

“Dad is right,” said mother quietly. “You can trust his judgment, dear; so run along now, and let’s hear no more about it. Sometime soon we shall try to plan a boat ride for all of us under more favorable conditions.”

“Well, I s’pose I can’t go then. Becky won’t like that one bit, because if I don’t go, she will have to stay at home, too. Isn’t there any chance you’ll change your mind?”

“No, the matter is settled. Someday you will learn that we have your best good at heart in the decisions we make for you. You may not always see why, but try to trust us, Heather.”

Becky’s mother was inwardly very much relieved to learn that her neighbor had failed to give her consent to the excursion trip. She herself had been very reluctant to grant permission to her own little girl, even on the condition that she be accompanied by her friend. So the matter was quickly dismissed by both girls, and instead of the boat ride, they took their picnic lunch to Bronx Park with Heather’s mother. They had a fine time together, and soon forgot about the disappointment of the morning.

When they left the park about the middle of the afternoon, they were startled by the excitement in the streets. Newsboys appeared everywhere, shouting, “Extra! Extra! read all about it. Steamer ‘General Slocum’ sinks!”

“What is it? What are they saying?” cried Heather, clutching Becky’s arm, as they picked their way through the streets.

“I think I heard the words, ‘Steamer “General Slocum,” ´ girls, “ said Heather’s mom, “but I’m not sure what else. Let’s buy a paper and see what it is, for an extra usually means something serious has happened.”

It was not until her dad came home that evening that Heather heard the details of the terrible disaster. While he read the account of all the tragic happenings, she sat listening with strained attention, never taking her eyes from his face.

The steamer had left its pier on schedule that morning, and was well under way with its cargo of more than 1,300 persons, when the cry of “Fire! Fire!” pierced the air. In an instant there was mad panic on board the “General Slocum.” Being constructed of wood, the vessel was very quickly enveloped in flames. Shrieks and gasps rose from every part of the doomed ship; and hundreds, crazed with fear, leaped into the river to their death.

“Lower the lifeboats!” shouted the captain, above the terrific din. But the crew was not well trained, and there were not enough life boats for the number of people on board. There was only one hope of escape for the majority of those still on the ship. If they were to be saved, it must be by means of the life preservers. Each fought frantically to secure the needed help before being forced to abandon the flaming vessel. But alas! The one means, which might have meant safety, proved all but worthless; for instead of being made of cork as they should have been, it was reported that the life preservers were filled with sawdust. “Criminal negligence,” said the judge later, when he sentenced the captain to ten years in the penitentiary.

One of the saddest things in the whole tragic experience was that the passengers who were drowned in the East River, or burned, lost their lives within sight of the shore. So near safety, yet lost. And then a weary search followed, when throngs of friends and loved ones crowded down to the riverbank to identify the bodies that were washed ashore. No words can describe the sorrow of mothers and fathers whose children could not be found; the agony of friends who would never again see the friends with whom they had parted only that morning.

Heather’s heart almost stood still when she realized that but for her parents’ decision, she, too, might have been among the missing, lost in the churning waters of the East River or in the flames of the burning vessel.

When her father finished reading, he turned towards her, fixing his eyes earnestly upon her. “Little daughter,” he said tenderly, “you are spared to us, when many a home is dark tonight because it has lost its most precious treasure. How very grateful we are that we still have you, dear.”

Heather’s eyes filled with tears as she slipped her hand into his and said, “How glad I am for such a wise mom and dad.”