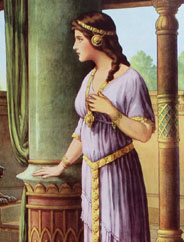 There must have been a lot of excitement in Persia those days. Every girl from India to Cush, in all the 127 provinces of the empire, was talking about the king’s search for a new queen. Everyone hoped she would be the one to be chosen. And you may be sure that every mother was certain her daughter was the most worthy for this high honor.

By the king’s command, beauty contests, or something similar, were held in every province, and the loveliest girls were given a free trip to Susa for the king’s inspection.

As more and more girls arrived at the palace, Mordecai had an idea. Why, his Esther was far more beautiful than any of these young ladies from Aram, Egypt, Arabia, and other parts of the country. They didn’t stand a chance beside his precious little star. They weren’t in the same class. Esther was far and away the best-looking girl in the world.

“I’m sure you could win,” he told her one day, after seeing some of the latest arrivals. “You’re so much lovelier than any of the others. Why not try and see what happens? It could be that God wants you to be queen.”

Finally Esther agreed, and she “was taken to the King’s palace and entrusted to Hegai, who had charge of the harem.”

When Hegai saw Esther, he was so struck with her beauty that he felt sure she would be chosen queen. So he gave her the best rooms in the house of the women and seven maids to wait on her.

This was encouraging, but it didn’t mean that Esther would be queen. After all, the king had to see all the other girls before he could make up his mind; and there might be someone else prettier than she.

As for poor Mordecai, he waited impatiently for news about his precious niece. He felt certain that the king would choose her. How could he do otherwise? But if he didn’t what would happen to her? Would she be allowed to come home again?

“Every day he walked back and forth near the courtyard of the harem to find out how Esther was and what was happening to her.” Can’t you see him pacing back and forth, looking up at the barred windows, hoping to get a glimpse of her face or a wave of her hand?

“O Esther, Esther, where are you?” I can hear him calling. “What has happened to you, my little star?”

Twelve months passed. Then one day Esther was called to meet the king. How excited she must have been! How hard she must have tried to look her very best! How she must have prayed for God’s help and guidance on this greatest day of her life!

Mordecai was waiting outside, you can be sure. And when Esther walked from the women’s house to meet the king, dressed in the finest robes the Persian court could supply and attended by all her lovely maidens, I can imagine he almost burst with pride. Such a beautiful dream she was! Onlookers in the corridors gasped in wonder as she passed by. Indeed she “won the favor of everyone who saw her.”