The Curse of the Key & When Pigs Flew

The Curse of the Key & When Pigs Flew

"No, I’m not joking. Dalilah Gumby told me so herself," answered Roxanne. 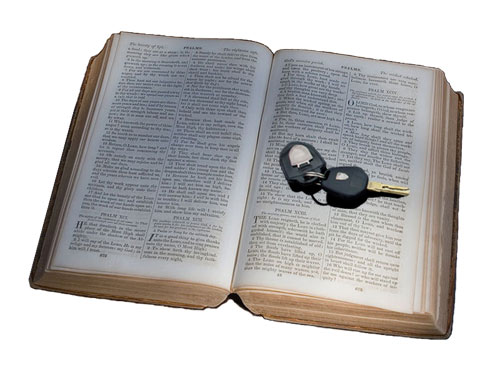 "Well, you are for one thing," smiled Trudy. "No, really, you remember that one lady that joined our church last year? Her name is Dalilah Gumby."

"Yeah, I was there when she was baptized," remembered Ryan.

"Well, Dalilah told Roxanne here and several of the other kids that there’s a curse in the Bible," Trudy went on.

"Well, as I remember, there’s quite a few curses," Ryan said. "It seems like the Israelites were always doing something that got them into hot water."

"No, Ryan. I mean this is a curse that the devil put on the Bible," answered Roxanne.

"Hmm… I don’t seem to remember anything like that," Ryan tried to recall.

"Well, as you know, Dalilah Gumby used to belong to a witch coven. While she was still a witch she learned about the curse," Roxanne informed Ryan.

"Wait a minute. You mean she still believes in some of that witchcraft stuff? I’ve never heard of such nonsense," spoke Ryan.

"It’s not nonsense. It’s a real curse! If you place a key in the Bible where Revelation 22 is, then you will receive the curse!" exclaimed Roxanne.

"Okay, guys it’s about time for worship," announced Mr. Blanco, the teacher. If you need to get a drink, or use the restroom, please do so."

Soon the Lake Superior SDA students were sitting in their seats for worship. Mr. Blanco told the story about Jesus and the demoniacs of Gadera.

"Okay gang, what did the disciples do when the crazy men ran from the tombs and rushed at Jesus and his disciples?"

Mr. Blanco wholeheartedly agreed, "Yes, they ran. And you and I probably would have too. Can’t you just see Peter this time? Later on John outraced him to a tomb. But boy back then, I’ll bet ole Peter was way ahead of John! And the wild men were coming at them so fast that he didn’t even have time to grab his sword! Can’t you just hear him and the others shout, ‘Gang way! Look out! The wild men are after us!’ And then finally, they kind of got out of breath and they turned back to see if the wild men had gotten any of their friends. And what did they see? Yes, Trudy, you have your hand up. What did they see?"

"That’s it!" Here’s all the disciples running for their life. And there’s Jesus standing his ground and doing what His Heavenly Father would have him to do. Let me ask you a question, young people. Was running away taking care of the problem?"

"No," several of the students answered.

"No, running away never takes care of the problem!" answered their teacher. "You can never run away from your problems. The only way to handle problems is to stand up to them and face them and pray. And that’s what Jesus did. He prayed to His Heavenly Father. And he commanded the demons to depart from those men and they were healed! And then where did the demons go?"

"They went into some pigs," answered Ryan.

"And what happened to the pigs?" asked Mr. Blanco.

"Well… they flew over a cliff and drowned in the sea," answered Ryan.

"So pigs do fly," smiled their teacher. "And what happened after that?"

"The men were in their right minds," answered Ryan.

"Why," asked their teacher.

"Because Jesus healed them," answered several of the students.

"Absolutely! Let me ask you a question: Is the devil a powerful foe?"

The students sat still, waiting for their teacher’s answer.

Several of the students replied, "Yes!"

"Then let’s pray about it," encouraged the teacher. "Dear Father in Heaven, we thank you for your power. Oh, God we know that the devil is a powerful enemy. And Lord, we know that we are weak, but you are all powerful. Father, the devil has all kinds of things to tempt each of us with. But, God we just pray that you would give us your strength and help us to resist the devil so that he will flee from us, for we pray this in the name of Jesus. Amen.
Just then, Ryan remembered the discussion that the girls were having when he came to school that morning.

"Mr. Blanco, do you believe that the devil can put a curse on the Bible?"

"Ryan, what are you talking about?" questioned the teacher.

"Well, according to Roxanne, Dalilah Gumby says that the witches in her coven all believed that the devil placed a curse on the Bible."

"Okay, Ryan, so tell me about the curse," answered the teacher.

Roxanne interjected, "Delilah said that if you open the Bible and place a key where Revelation 22 is, and close the Bible, then you will receive the devil’s curse. You might be blown out the window, or burnt with fire, or blown to bits!"

"Well, I’ve got a key here," Mr. Blanco took his car keys out of his pocket and started taking one of the keys off the ring."

"Oh!" shrieked several of the girls who had already heard of the ‘curse’.

"Mr. Blanco," you’re not planning on doing that, are you?" questioned Trudy.

"Well, I wouldn’t purposefully place myself in the path of temptation, but, it seems that several of you didn’t quite understand the lesson in the worship this morning," replied Mr. Blanco. "Just who did we say was all powerful?"

"Then God won’t allow any harm to come our way if we use a key as a book marker, will he?"

"Well, just the same, can the rest of us go into the library while you try this thing out?" asked Trudy.

"Yeah, can we go into the library?" asked Roxanne and several of the others.

"Yes, you can go into the library and watch from the window," answered Mr. Blanco.

A short time later all the students were in the library peering through the window that separated it from the classroom.

"No, I don’t believe in superstitious things," replied Ryan. "And even if there really is something to this hocus-pocus, then I know that God is more powerful than whatever or whoever he is."

"But it probably wouldn’t hurt to pray, anyway, would it?" suggested Mr. Blanco.

Ryan bowed his head as Mr. Blanco prayed, "Our Heavenly Father. You are all powerful. Lord, Ryan and I wish to demonstrate to the rest of the class that your power is greater than that of the devil. We pray for your protection now as we place this key in the book of Revelation. Help us to reveal to the rest of the class as Elijah did on Mount Carmel that you are the omnipotent God. For Jesus sake, amen."

The rest of the children stared at the two as Mr. Blanco opened the Bible to Revelation 22.

"Ryan would you like to do the honors?" asked the teacher.

"Sure," Ryan replied. Ryan carefully laid the key into the book of Revelation and closed the book.

The rest of the school children waited to see if something would happen. But Ryan and their teacher both looked okay. There was no loud explosion, no strong wind, no flaming fire.

"Maybe nothing happens until you open the book back up and take the key out," suggested Roxanne through the glass.

"Hey Roxanne, maybe nothing happens even then," he grinned.

One by one the school children filed back into the classroom and took their seats.

Ryan admitted, "Well… maybe a little. But I didn’t want to be like the disciples and run away from my fear. I felt like I had to take a stand for Jesus."

Satan is well aware that the weakest soul who abides in Christ is more than a match for the hosts of darkness… (Ellen Gould White, ‘Snares of Satan’, The Great Controversy, p.530.)