The Spiders That Got Drunk

The Spiders that Got Drunk 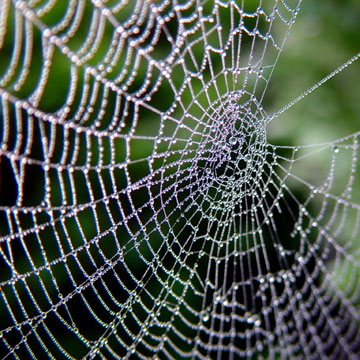 Not long ago a young scientist won first prize in a high school science fair with her experiments with spiders and their webs. Her project compared webs spun by normal spiders and those spun by spiders under the influence of alcohol.

At first, the girl collected a number of common house spiders for her experiment, but she had difficulty with them. When she injected the wine directly into them, they all dropped dead. Then she tried feeding wine-injected flies to the spiders. The spiders did not die, but they did not spin webs, either. Somewhat discouraged, she took her problem to her teacher and learned that house spiders are not much for making webs. They simply make strands of silk that are strung in all directions with no particular pattern. Her teacher suggested finding garden species, long known for their talent for constructing beautiful orb webs.

Heartened to try again, the girl again got busy with her project. She found a number of garden spiders and fed them wine-injected flies. The advice worked! The drunken spiders began to spin all sorts of wild and unorganized webs. Nothing like the intricate and near-perfect designs they were able to spin normally.

After eating the alcoholic flies, a spider would begin spinning out of control, totally without method or reason. And the tipsy creature would keep on spinning without stopping until it passed out cold. The master weaver was confused at its ancient art.

Each of us is weaving a pattern of life and we need all our abilities under control to do it properly. We will not be able to do this if we take into our bodies alcohol, or any other substance that wrongly affects us in any way. It’s in the Bible, Proverbs 20:1, "Wine is a mocker and beer a brawler; whoever is led astray by them is not wise."