God has a problem. He wants to come and take everyone to heaven where there is no more cancer or sadness, no more pain or poverty, no bad storms or earthquakes, no bullies or murderers – just happiness and peace forever more. But there would be no peace and happiness if the devil continues to tempt people to do wrong.  A bully might try to boss everyone around if he was allowed to live in heaven, and a thief might try to steal all the golden crowns. God has to deal with the sin problem and destroy the devil and all of his evil works completely. Let’s read what the Bible says about hell.

What will God do with the wicked? It’s in the Bible, “For the wages of sin is death, but the gift of God is eternal life in Christ Jesus our Lord” (Romans 6:23, NKJV). There are only two groups of people when Jesus returns – the righteous, who love Jesus, and the wicked, who do not love Jesus. The righteous will live forever and the wicked will receive death.

Why will God destroy people that He created?  Hell was not designed for people. It’s in the Bible, “Depart from Me, you cursed, into the everlasting fire prepared for the devil and his angels” (Matthew 25:41, NKJV). Every person can choose whom they will follow. Those that follow Satan will be destroyed in hell with Satan. Those that follow Jesus will live forever in heaven with Jesus. Every individual has to make that choice.

How will God destroy the wicked? It’s in the Bible, “For behold, the day is coming, burning like an oven, and all the proud, yes, all who do wickedly will be stubble, and the day, which is coming shall burn them up,” Says the LORD of hosts” (Malachi 4:1, NKJV). God will use fire to purify the earth of sin.

Are any people in hell now?  No! It’s in the Bible, “Therefore as the tares are gathered and burned in the fire, so it will be at the end of this age” (Matthew: 13:40, NKJV). The end of the age is another way of saying “the end of the world.”

How long will people burn in hell? It’s in the Bible, “For the Son of Man is going to come in his Father’s glory with his angels, and then he will reward each person according to what he has done” (Matthew 16:27, NIV). God is fair. The person who sins the most will get the most punishment, but Satan will get more than anyone.

Why do some people teach that the fire will never go out? The Bible does say, “And these (the wicked) shall go away into everlasting punishment: but the righteous into life eternal” (Matthew 25:46, KJV). It’s also in the Bible, “as Sodom and Gomorrah …..are set forth as an example, suffering the vengeance of eternal fire” (Jude 7). The fire is eternal that burned Sodom and Gomorrah, yet the cities are not burning today! In fact Peter wrote, “and turning cities of Sodom and Gomorrah into ashes, condemned them to destruction, making them an example to those who afterward would live ungodly ;”( 2 Peter 2:6, NKJV).

So what does eternal fire mean? It means the results of this fire are eternal. The wicked will never live again. Their death is eternal.  It’s in the Bible, “’You shall trample the wicked, For they shall be ashes under the soles of your feet on the day that I do this,’ says the Lord of hosts” (Malachi 4:3, NKJV).

What happens to Lucifer who became the devil? It’s in the Bible, “The devil, who deceived them, was cast into the lake of fire and brimstone where the beast and the false prophet are. And they will be tormented day and night forever and ever” (Revelation 20:10, NKJV).  Again God explains what that means in another verse.  “….Therefore I brought fire from your midst; It devoured you, (Lucifer) And I turned you to ashes upon the earth in the sight of all who saw you; You have become a horror, And shall be no more forever.” 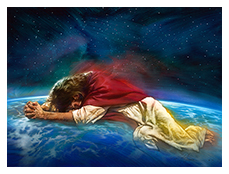 What happens to this earth and the wicked people in it after hellfire? God makes a perfect new earth, just as it was in the beginning. “Now I saw a new heaven and a new earth, for the first heaven and the first earth had passed away” (Revelation 21:1, NKJV).

Why does God destroy the wicked if He is a God of love? God does not want to destroy anyone. The Bible says, “The Lord is …not willing than any should perish but that all should come to repentance” (2 Peter 3:9, NKJV). Again He says, “For I have no pleasure in the death of one who dies,” says the Lord God. “Therefore turn and live!”(Ezekiel 18:32, NKJV).

This invitation is just for you. Turn to Jesus and live forever with Him.